When we buried my beloved and very-much-missed Granna Ellabel (Duncan) West at Hightower Baptist Church in Ball Ground, GA last Christmas Eve, the ground was a little soggy and I had chosen for some reason to wear heels. As I made my way to her burial site, I – being me – tripped and accidentally had to plant my foot smack in the middle of a gravesite to keep my balance. I know a lot of people walk right on graves, but I’m one of the ones who tries to avoid that, so I looked at the tombstone to apologize in person to whomever I had just accidentally stomped on and wouldn’t you know it – it was my GGGrandmother, Josephine L. (McDaniel) West!

On that super sad day, I felt a little reassured. I assume, as my distant grandma, she wouldn’t have minded me using her grave to stop myself from taking a tumble.

Josephine L. McDaniel West was my grandpa Edward West’s paternal grandmother, but he since he was only 2 years old when she died he doesn’t remember her. From what I’ve read and heard in other family stories, though, she was a tough woman who could give as good as any man and even helped build the old West family home that still stands to this day in Ball Ground, Georgia off Highway 372. (Picture to come!)

An Ancestor’s Life in Pictures

The reason I’m writing about Josephine (or Josie, as they called her) today, is because I’m lucky enough to have three pictures of her taken throughout her life.

This first picture was taken in about 1878. She would have been about 21 years old, and still unmarried. This picture is a tintype and I was lucky enough to discover it via a cousin, who goes by the handle “marshahistoric” on Ancestry.com.

Both women had their arms crossed and looked a little dubious. It could well have been the first time they had had their pictures taken. No matter, I love their expressions. They are not about to take any crap off of anybody, and it’s an expression I often see on West faces to this day.

Josie would have been about 40-years-old when this picture was taken. You can see that she was thin, with very high cheekbones, and that her ears poke out remarkably! She’s still giving the camera a bit of a dubious look. This time, though, I have a feeling it’s because she has been wrangling 7 children to be quiet and still. As you can see from Robert Emory West’s wiggling in the picture, this didn’t work.

This image is part of a much bigger panoramic picture. You can see the West Family half in my blog header (scroll up!), but there’s also a second half on Ancestry.com. Contact me and I’ll send it to you or help you find it.

Josephine would have been around 50-years-old a this point. You can see she that her hair is much grayer, and she’s still very thin. (Look at those fingers!) This picture if part of a larger family portrait: 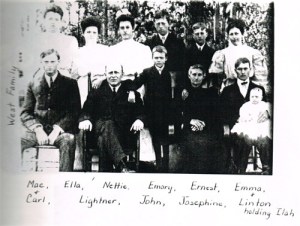 Having lost my grandma (not Josie’s descendent) to the cruel combination of Alzheimer’s and Parkinson’s disease, I felt a pang when I discovered Josie’s death certificate:

Her cause of death is listed as “senile insanity” and  contributing to her death was an “injury from fall.” I can only imagine how tough it would have been to try and care for her and keep her safe as she lost her faculties.

1928 was a rough year for this West Family. Their patriarch, Lightner West, had just passed away the year before, and Josie West and two of her sons, also passed away. My great-grandfather Walter Linton West died from pneumonia following a search party (another great, if sad, story!) and his brother died after either being struck by lightning (as his death certificate says) or changing a dangerous old light bulb (as my grandfather Ed West says.)

On a brighter note, I hope you enjoyed seeing one ancestor’s life in pictures. If you’re researching the West or McDaniel lines please contact me. I have more information to share and really need to know more about the McDaniels.

View all posts by Jennifer Dunn

This site uses Akismet to reduce spam. Learn how your comment data is processed.